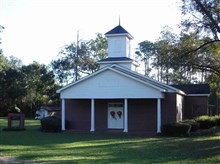 Organized in 1908, this church began in a tent meeting where ninety-one members joined- thirty-eight on profession of faith and fifty-three by transfer of membership. The first pastor was Rev. R. W. Cannon. The first building was also erected in 1908. The trees were given by Joseph Herring and were sawed by H.I. Clay without charge. In 1944, the building was remodeled and five Sunday school rooms were added. In 1939, the Woman's Society of Christian Service, now UMW, was organized with six members. In 1951, the extension of S.R. 179 necessitated moving the building. This was done in 1952 and an annex added. The present building was erected in 1958-1959.

The parsonage was completed in 1956 and dedicated by Bishop Arthur J. Moore. During the 1960s, a Hammond organ, a stained glass window over the choir loft, an altar candle/cross set, and altar screens were donated and dedicated during Homecoming services held on January 19, 1964. In the 1990s, additional updates were made to the sanctuary that included the installation of stained glass windows, brass and glass pendant light fixtures, and new carpet and pew cushions. On January 29, 1995, a dedication service was held to present these gifts to the glory of God, to the upbuilding of human life, and to the service of the church. In June 2014, the church was moved from the dissolved Thomasville District to the newly organized Southwest District.

The Bethel Methodist Church was organized in 1882. Three acres of land, given by Mr. Josh Merritt in 1885, was given and it includes the ground on which the church now stands, the cemetery, and a lot of lands on which timber now grows. The names on the deed are George A. Wight, B. H. Powell, N. M. Griffin, T. H. Herring, I. J. Williams, William Powell, and Casper Walker who were trustees of the Cairo Circuit, Thomasville District at the time. The church structure, which the members built, still stands on the same spot. The cemetery was started before there was a building and the deed drawn up. Mr. Jonathan Merritt was the first person to be buried in Bethel Cemetery in November 1882. The first couple to be married in the church was Mr. William A. Bell and Miss Amalea L. Herring in 1884. Worship services were held once a month on Saturdays and Sundays. A Sunday school was organized before 1890 and continued until 1972.

In 1945, under the pastorate of Rev. Paul Barrett, the Woman's Society of Christian Service was organized with nine charter members and Mrs. Alvie Harrell serving as the first President. In 1972, this organization changed its name to the United Methodist Women.

On March 16, 1955, the official boards of Calvary and Bethel Churches met and, under the leadership of Rev. J. B. Smith, Superintendent of the Thomasville District, and Rev. Buford Fulford, pastor of the Cairo Circuit, a new Charge called Calvary-Bethel was formed. Rev. Fulford was appointed the first pastor.

The ground was broken in September 1955, to build a new parsonage. A. M Gainey Jr., Carl Jones and Earl Williams from Calvary, and Leroy Hopkins Jr. and M. J. Johnson from Bethel were appointed as the parsonage building committee. The parsonage was dedicated by Bishop Arthur J. Moore on March 4, 1956. In 1959, new pews and flower stands were bought and the pulpit, pulpit furniture, and altar rail were refinished. In 1966, Centennial joined the charge. Central heating and cooling were added to the building and the Sunday school classrooms were remodeled for use as a Social Hall in 1974. 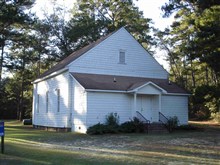 First known as Possum Shuffle, this church was organized in 1872. Its first building was a log structure used also as a school. The first pastor was Rev. William Powell, who was assisted by Sam Cassels, a layman. Rev. Walter C. Jones was the first ordained minister of the Metcalf Circuit, this church's earlier charge. In 1884, the present building was erected across the road from the log structure by the laymen and named in honor of the 100th anniversary of the first Methodist Conference in America, 1784. The sanctuary was divided by a lattice rail, men sitting on one side and women on the other. Nail holes are still visible down the backs of center pews where the rail was attached. Before 1961, the building was heated by wood; each member brought a few pieces for each service. The outside walls have been covered with cypress shingles.

In 1961, gas heaters were installed. In 1962, a dozen new song books and a piano were donated. During the late 1960s, a kneeling bench was added around the chancel rail. Trees were cut and sold and fish fries held to add funds to the church improvement fund.

The Calvary-Bethel Charge is a group of three United Methodist Churches, all of which are located in south Grady County, GA. We are members of the Southwest District of the South Georgia Conference of the UMC.

Our United Methodist Men's group was founded in 2018 and has since completed and contributed to church and local causes such as installing flag poles, community food banks and hurricane relief assistance. The UMM meets on the third Monday of each month at 7:00 PM at Centennial UMC, all offerings are used toward food and project expenses.